Steps for using the machines 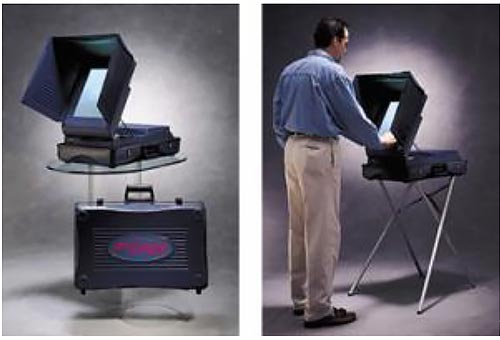 Brief Description: A direct-recording electronic (DRE) voting machine records votes by means of a ballot display provided with mechanical or electro-optical components that can be activated by the voter (typically buttons or a touch screen); that processes data by means of a computer program; and that records voting data and ballot images in memory components. After the election it produces a tabulation of the voting data stored in a removable memory component and as printed copy. The Sequoia AVC Edge is a voter-activated multilingual touch screen system that records votes on internal memory. Accurate, secure and auditable; the AVC Edge has a long history of success throughout the country.

The AVC Edge features a touch screen for the voter interface. It can be placed on a tabletop or assembled as a stand with its integrated legs.

The display is extremely legible thanks to the large typeface on the 15-inch LCD screen. Scroll buttons give voters straight forward navigation tools for moving forward and backward through the ballot. Voters can verify their selections and change them at any time before casting their ballot. The AVC Edge will not allow voters to over-vote a ballot, thereby reducing the number of unintentionally spoiled ballots. After the polls close, the system prints polling place totals; these are stored as a permanent record – further assuring the security and integrity of the election.

Cast votes are stored in multiple locations in each voting machine to guarantee accuracy and ensure that there are numerous ways to retrieve and audit records. The AVC Edge is completely accessible to voters with physical, vision and literacy challenges In case of a power failure, each machine has built-in battery backup so that the election can continue for two to four hours.

For a voter to cast a ballot, a poll worker must first activate a Smart Card for the voter on the Activator Machine. The card will stay active for thirty minutes or until a vote is cast. A deactivated card cannot be used to cast a vote. To cast a vote, a voter inserts the Smart Card into the DRE. Subsequently, the ballot pops up onto the screen. The voter is prompted to select the language he wishes to use and then selects the candidates he will vote for via a touch screen. On these machines, it is impossible to vote for more than one candidate for a particular position, but the voter does not have to make a selection for every office. If a voter touch-selects a candidate on a DRE but wishes to change his selection before casting his ballot electronically, the voter may do so by re-touching the name of the candidate they wish to deselect and then touching the name of the candidate for whom they want to vote. Poll workers are available to instruct voters how to change their votes if necessary. Before the vote is recorded, a screen displays all the voter’s choices and lists each issue on which he has not voted. The voter can then confirm his vote or go back and make changes. If the vote is confirmed, the card immediately deactivates, and the time of the vote is recorded on the card. If the voter wishes to check whether or not his ballot was cast, the Activator Machine will determine whether the card is activated or deactivated. However, the card will not reveal how the vote was recorded on the DRE results cartridge.

One of the benefits of DREs is that they comply with the requirements Help America Vote Act (HAVA) of 2002 to provide equal access to voters with disabilities. Some of the DREs include audio sets and keypads with large, colorful, uniquely shaped buttons for the blind, illiterate, and manually impaired. Additionally, in bilingual districts, the ballot is read to the voter in English or Spanish. Voters do not have to show that they have a disability to use the Audio Voting Machine, though the voting process takes longer on the Audio Voting Machine than on the regular machines. Impaired voters can use the keypad and headphones to vote without assistance.